Over the years since our son's death, we have learned of several others from either poppy seed or poppy pod tea. Some of them are well documented and others are just based on emails we have received. Below is a listing of them.

Some of these deaths have a common denominator with our son's: the fact that they had also taken benzos (benzodiazepines) like Xanax (Alprazolam), Valium (Diazepam), Klonopin (clonazepam), etc. Mixing benzos and opiates increases the risk of respiratory depression (respiratory failure). In the case of our son, his blood free-morphine content alone (219 ng/ml) was already lethal, even without the benzos.


This case was widely reported on the media (see links below for details).

We received the email below from Chadley's sister-in-law. His toxicology report is included.

"My brother in law was found dead Saturday afternoon by his 2 young sons. He was in his bed and they just thought he was sleeping in.My sister had recently moved out because he had started drinking heavily again. The two boys age 9 and 11 are his boys. Their mother died several years back in a car accident. Now their father is gone too.No one could figure out what killed him. There was no alcohol in the house. No sign of other drugs or drug use. The only thing they found was a large quantity of poppy seeds, a blender, some juice and a shirt that he was using to (presumably) strain the seeds. We have to wait for the official autopsy report which can take 60-90 days, but we all know what it will say. I can't believe that the only other reported death from this I have found was your son. There are links to this website on many, many other sites about poppy seed tea. Even on the pro-drug use forums. Your story is serving as a valuable tool for those who are curious. I wish my brother in law would have read your story before trying to experiment on his own. I will update you when we have the official report. Thank you so much for this site.

And from a second email:

He did have problems with anxiety and depression and was prescribed Zoloft.... He has 2 small sons age 9 and 11.... He told the boys at 7pm on Friday night he was going to lay down and read. The boys had a friend staying the night. (which is why we don't think he was doing this to get "high"). The boys went to bed later and went to check on him around 10 am because he usually didn't sleep in that late on Saturdays. They are the ones who found him dead."

We received the email below from Jeremy's brother Tyrone. Jeremy was using poppy pod tea rather than poppy seed tea. We were unable to get more details.

"I have been doing research online just recently. It has been almost two week now since my brother Jeremy has died. He died one day after his 18th birthday. I cant help but see very similar characteristic straits between the writer and my brother. Jeremy just wanted
a way out, he had been in drug rehab treatment centers for almost a year.. Until my parents got him out. I guess maby he wasnt strong enough and could not handle real life. I think back now and I believe he was looking for any way to avoid the reality he knew in life. Life did not treat my brother well. By the time he returned home from rehab he was trying everything to get myself and my parents to get him the right painkillers to make him feel better for the time. He begged for me to buy him alcohol or weed, I refused..
I knew it would lead to nothing but his self destruction. Little did I know that by not helping him get something to ease his pain it would lead him to find a tea online that would lead to his death. My parents did not know how to help Jeremy.. no one did. My brother read websites like erowid.org constantly trying to find the ultimate altered state. He eventually signed up for eBay and started ordering pods online by the box full.. I feel guilty like I did not do enough.. like I should have read more information myself to try to help Jeremy.. I researched poppy tea and was very concerned about him
ordering a plant that could produce heroin.. but never read anything related to death related issues using the tea.. Now he is gone and I am here searching for answers. Alone without my brother, my friend. I miss him so much. Im sorry.. maby this is not the right
place to post this.. it's just very hard on me.. he had his whole life ahead of him.. he was only 18 :(   "

"...I am positive that PST overdose was the cause. I was staying with my parents for a few days and woke to an email from him begging for help because he thought he was dying from an overdose from it. This is when my parents and I went to my house where we found his body...my fiance was found with a jug of it (PST) next to him... (after a call to 911 never responded back to me and I could not get a hold of him (Brian did not have immediate access to a phone.. email was our only form of communication.. we were in the process of moving).. according to neighbors the police simply knocked on the door and left when they received no answer.Also, FYI, PST shows up as morphine in the body."


His family decided to take him off life support after being in a coma caused by a morphine overdose from taking poppy pod tea.


He was found not breathing in his bed the morning after after taking poppy pod tea:

"I found your website after I started doing some research myself following the death of my 18 year old son Cory on July 28th 2009. Going by what the detective had told me, I came to the conclusion that it must somehow involve poppy seeds and poppy pods since that is what they had removed from his room along with a bottle of liquid... after google brought up your page I was able to do additional research on the subject. I had never heard of this before. Since then we have discovered that the cause of death was morphine intoxication. My son would have turned 19 on the 15th of August, 2009. Every single day has been a moment by moment struggle to cope with the unimaginable. I felt the need to reach out to you and share the story of my own loss as well as send my condolences. I miss Cory in every breath I take."

This case also occurred in the Fort Worth Texas area, just like Chadley Hesseltine (listed as case #3 above). Both toxicology reports were issued by the same lab and the same staff.

We received an email from the victim's father telling us about his son's death. Robin was found in his room with poppy seed tea prepared in a bottle. Leftover poppy seeds were also found.
The coroner's report stated morphine overdose as the cause of death

He was found dead after after taking three cups of poppy pod tea. The official medical cause of death was an overdose of morphine and codeine.

This case was widely reported on the Canadian media (see links below for details).

This case was widely reported on the UK press (see links below for details).

See link below for details:
The Australian.com 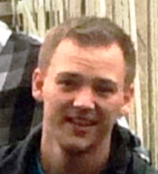 See links below for details:

The following is an excerpt from the email we received from his mother, Trish:

"My son did not tell me he purchased this.  He was always trying to find some natural herb to help with his anxiety or depression.  Although he was taking his psych meds every day, It was never enough to keep him happy or stable.  My son had clinical depression, bipolar, bipolar depression with psychotic episodes and would become delusional at times. I guess he tried poppy seed tea once or twice.  He told me it helped his anxiety but it was not very strong.  I told him I do not want to hear about his herbs because he would obsess about herbs and spend his whole SSD check on herbs.  I did not think they would result in his death. I was so uninformed. He would hide his purchase because  It was a never ending battle and we would argue about it constantly.

When the police arrived, they pulled out a 15 pound bag of poppy seeds that were sitting on his desk and a pitcher of poppy seed tea that was brewed and a big almost empty glass of the tea sitting on the table next to his head as he slept but never woke up.  This morning, after about 10 weeks waiting, the detective called me to advise me the corner report stated accidental death caused by lethal levels of morphine toxicity. "

Other Deaths from Poppy Seed Tea (and Poppy Pod Tea)